A Second Team at Cape Adare

In 1911, Cape Adare became home to the Northern Party of Captain Robert Falcon Scott’s Terra Nova expedition. Their job was to explore the area while Scott made his attempt on the South Pole.

Ridley Beach, Cape Adare, showing the Northern Party’s hut at the left and Carsten Borchgrevink’s two buildings at the right in 1912. The Northern Party hut has not survived.

The six men brought and erected their own living hut, using the Southern Cross buildings as workshop, gymnasium, darkroom and storeroom. Their hut has since collapsed due to the Antarctic winds, but many of the Northern Party’s supplies remain in Carsten Borchgrevink’s living hut.

The routine of the Northern Party’s winter at Cape Adare contrasts sharply to the disorder of the Southern Cross. The men were up at 7.00 am every morning, with regular duties to perform. The entire hut was scrubbed out on Saturday mornings and church services were held on Sundays.

Much of the clothing that remains at Cape Adare is from the Northern Party. Each man had a weekly wash day, when he would take a hot bath and launder all his clothes.

Some of these clothing items have been carefully labelled for or by their owners. The long johns belonged to the party’s leader, Victor Campbell, and the socks to surgeon and zoologist, George Murray Levick. 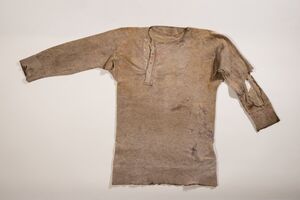 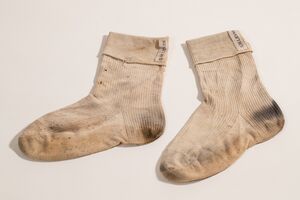 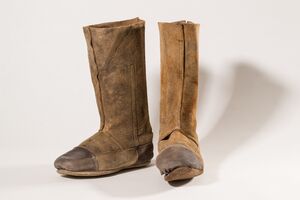 Rubber bladder from a punching ball

Keeping physically fit was a priority for the Northern Party, who set up a gym in Carsten Borchgrevink’s living hut.

This rubber insert is from a punching ball that was used as part of their winter training programme. It started to perish in the cold and was no longer airtight. The men weren’t able to mend it, so simply stuffed the ball with seaweed and carried on.

The boxing gloves have been improvised from normal cold weather gloves, with stuffing hand-stitched into place by one of the expedition members.

The cake was carefully removed in order to treat the corroded metal tin. An existing tear in the wrapper was gently lifted back to reveal a perfect-looking cake inside. The cake is now safely back inside the tin, ready to return to Antarctica.

Inside this rusty tin is a perfectly preserved fruit cake that was probably baked in 1910. It is wrapped in paper and The Antarctic Heritage Trust conservators say it looks and smells almost edible.

The cake was probably left at Cape Adare by the Northern Party. British firm Huntley & Palmers provided provisions for the Terra Nova expedition. Fruit cake was a perfect high fat, high sugar food for energy-hungry explorers. Plus, of course, it goes very well with a good cup of English tea.

This delicate watercolour was unearthed from a pile of mould‑covered papers found on a bunk in the Cape Adare living hut in 2016.

It was painted by Dr Edward Wilson, best known for having accompanied Captain Robert Falcon Scott to the South Pole in 1911. Wilson died alongside Scott and three others on the return journey.

Wilson was a zoologist as well as an accomplished watercolour painter. His careful wildlife studies reveal a scientist’s eye for detail.

The Tree Creeper is a Northern Hemisphere bird. It is not known exactly how Wilson’s watercolour made its way to Adare, but it is likely to have been left there by the Northern Party in 1911, hiding quietly in the shadows while a century of storms raged outside.